I learned to play guitar so that I could write songs about whatever I fancied.

The first televised moon landing impressed me as it did millions.

This event inspired my first song, Truck Drivin’ Astronaut. It’s written from the viewpoint of an astronaut who drives a truck and drinks beer back on earth.

A few years after I wrote the tune, my friend Jim Vaughn came through town. He was working for a fire retardant company and had a wonderful protective suit. Looked like something an astronaut might wear. 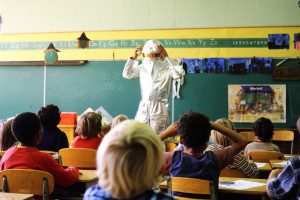 Jim graciously gave me the suit before he left town for his next adventure.

Sometime in the early 1980s, both the suit and the song were covered by Randy Mason for his hit TV show, Bringin’ It All Back Home, on Sunflower Cablevision in Lawrence, Kansas.

Randy Mason and Rusty Laushman on the job with me in the silver suit.

The Barking Geckos performed the tune a few times in Lawrence, Kansas between 1975-1982.

Waltzing across the stage at a Geckos concert..

I finally recorded the song in my office, about 25 years after I wrote it. Here ’tis:

This site uses Akismet to reduce spam. Learn how your comment data is processed.